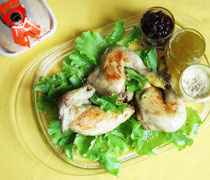 This recipe is perfect for recycling Galletto leftovers, whether they're baked, fried, steamed or grilled. They can simply be served as a cold plate (or reheated), accompanied by some sauces such as: – Red currants compote sweet and sour In a thick bottom pan, boil over low heat: 1 kg of fresh red currants, 500 gr. of sugar, one cup of apple cider vinegar, 1 tablespoon and ½ of pepper, ½ tablespoon of cloves, ½ tablespoon of cinnamon powder. Cook, stirring from time to time, until the sauce is neither too dense nor too liquid. Pass it through a fine-meshed strainer to remove the cloves and the peel and then pour it hot into glass jars previously sterilized. – Sesame sauce Mix the same amount (eg 2 tablespoons) of mayonnaise, greek yogurt, tahine (sesame seed sauce), mustard and a little less honey (no eucalyptus). Decorate the surface with toasted sesame seeds. – Green tomatoes compote In a thick bottom pan, boil over low heat: 1 kg of green tomatoes, cut into small pieces, 500/600 gr of white sugar and a few of balsamic vinegar. After about 1 hour and half, whip everything with a mixer, pour it into glass jars previously sterilized and then boil the jars in a large pot full of boiling water, wrapping the jars in towels to avoid them breaking. 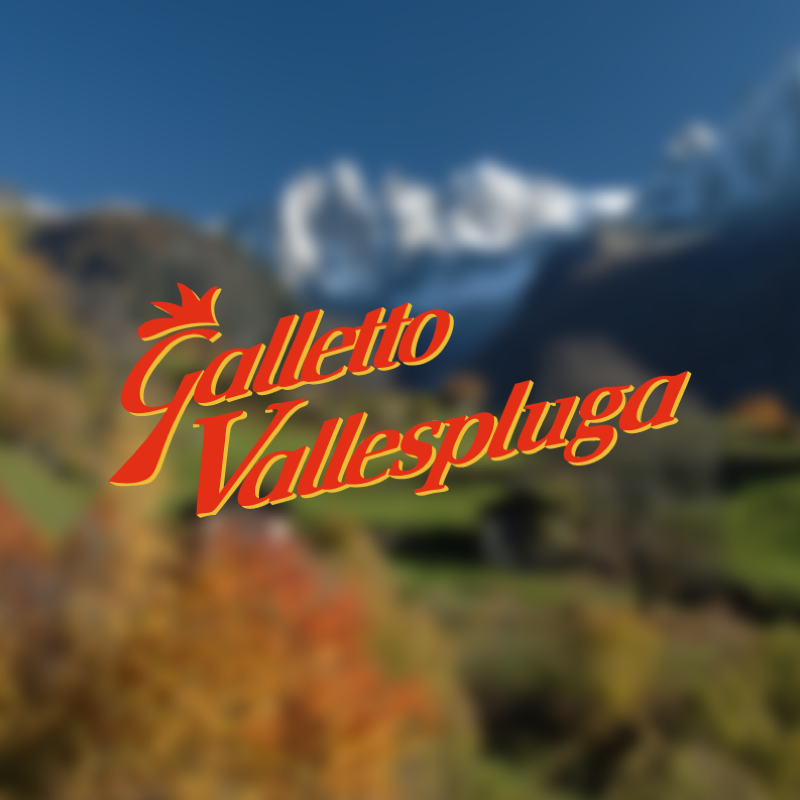 Galletto Vallespluga with Calvados and apples

Preheat the oven to 190° C.
Peel the apples, cutting 2 into small pieces and thinly slicing the other 2.
Sprinkle with cinnamon, salt and pepper.
Stuff the Galletto with the small pieces of apple. Close with a toothpick.
Put the stuffed Galletto into a roasting tray and rub with oil, season with salt and pepper and roast in the preheated oven for 35 minutes, turning occasionally. After 35 minutes add the Calvados and grappa and cook for a further 15 minutes. Then, add the apple slices to the pan and continue cooking for 20 minutes, adding water if necessary.
When cooked, cut the Galletto into pieces and serve with the apples and the juices from the meat.

Fillet of Galletto Vallespluga with egg (and ham)

Beat the fillets carefully to make them thin, season with salt and cover with a sprinkling of flour. Dip them into the beaten egg and place in a pan with the melted butter.
Cook over a moderate heat for 5-6 minutes and serve hot.

Variation: why not add strips of cooked ham during the last few minutes of cooking.

This recipe is from Reunion Island in the Indian Ocean. The combination of these ingredients makes us appreciate the delicate flavor of the Galletto and the scent of tropical spices.

Finely chop the garlic and finely slice the onions.
Skin the tomatoes and cut into little cubes.
Remove the thyme leaves from the branch.
After having cut the Galletto into pieces, add salt and pepper.
In a pan with oil, fry the pieces of Galletto on all sides. When they are golden, remove from the pan and keep warm in a bowl.
In a saucepan add the white wine. When it has evaporated, add the onion, thyme and garlic.
Cook for about 5 minutes and then add the pieces of Galletto, the tomatoes and the curry, covering with the broth.
Cook over low heat for 45 minutes, making sure nothing sticks to pan. Serve the Galletto with rice, topped with the remaining sauce.